Finally! On May 19, 2022, GitHub released one of its most requested features: Math support on Markdown! Many had been anticipating this for years, including myself, so much in fact that I wrote a browser extension to get there early. (xhub, it can do a few other things so check it out.)

The syntax GitHub has chosen is the familar $-based TeX syntax.

I’m pointing out below why this may be a problem.

The best thing is that something is finally there. This

You’ll notice that not everything is working here:

Apart from that: Great! This works in README.mds, issues, discussions, including the Preview tab.

Note: In an earlier version, the article said that \newcommand would work. Apparently this has been removed shortly after release. See here for a bug report.

Getting only one of Markdown and LaTeX rendering right is a big challenge. Mixing them together gets you in all kinds of trouble.

What I think GitHub does now is the following:

This logic has fundamental issues.

One can construct many more ambiguous cases, e.g.,

So, how could this be avoided? We need to make sure that the Markdown parser does not mess with the math. One way of doing this is to drill open the Markdown parser and and tell it that $ and $$ have a special meaning. This means maintaining your own parser, and still won’t work in last two examples above (e.g., $x = \$$). For this to work you’d have to interleave a Markdown and a (proper) LaTeX parser which is territory nobody wants to enter.

Another way of avoiding such problems altogether is to use code blocks for math – their contents are left untouched by Markdown anyway. In fact, this is how GitLab and xhub handle their math support:

With this syntax, rendering becomes easy:

This avoids all of the problems listed above. It ties in nicely with other Markdown tools like formatters or converters (e.g., prettier). The simplicity of the approach also makes it more manageable for other sites to support this format.

GitHub could enable this syntax on top of $-$$, except for the fact that they would have to change the order of the delimiters in inline math to

because simple $ are already getting a special treatment.

Not everything works. Most notably, there is no math support in

(See here for a bug report.)

Getting math in lists etc. right is hard because of the syntax GitHub chose. With GitLab’s syntax, math works wherever Markdown code blocks work.

Then there is their choice of rendering engine, MathJax. Historically, it’s the first engine that could seriously render math in web pages, and is used in many places, e.g., math.stackexchange. If you look just a little closer, though, you’ll find there’s at least one serious competitor: KaTeX. In terms of GitHub stars, it has become way more popular than MathJax: 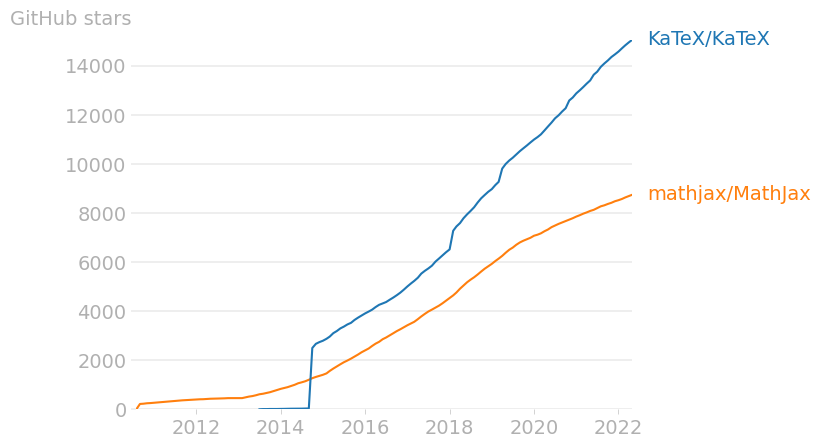 Why is that? Having worked with both MathJax and KaTeX in xhub, I think the reasons for the popularity include

For one, with KaTeX I’ve never had problems as described in the Ugly section below.

Note: In a former version on this article, it was claimed that MathJax is barely maintained. This is not true.

MathJax’s default font MJXTEX-I and GitHub’s default text Helvetica have a different x-height/cap-height ratio. This means that, if you match the capitals in height, the small letters won’t match. This is what it looks like: 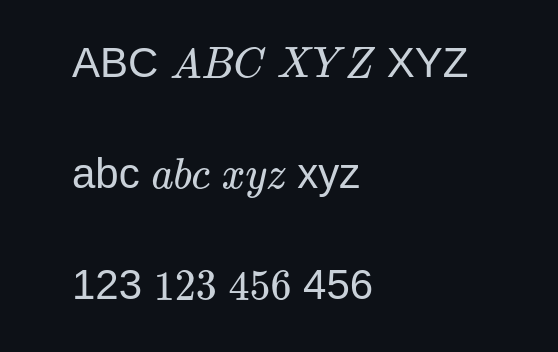 Font enthusiasts will also notice that the text font is sans-serif while the math font has serifs – a no-go in serious typesetting, but forgivable on the web.

There’s probably not too much you can do here. Matching text and math fonts is a whole branch of science, see, e.g., here.

Kerning is a typographist’s way of saying distance between letters. Compare the kerning in a = b between GitHub

Clearly, the GitHub kerning is off. This could perhaps be a font issue, or an issue related to MathJax. (See the bug report here.)

The reason why I’m so excited about this feature is that, in combination with version control and the issues/discussions capabilities in GitHub, I can see tectonic changes in how we’re publishing science. At last, science can really reap the benefits of a connected internet by moving away from static PDFs to living, breathing repositories which render like PDFs and provide a central place where one can actually talk about the article. – And fix bugs!

I’m less enthusiastic about some of the engineering decisions in developing this product though. The choice of MathJax over KaTeX confuses me. Since that is more or less a drop-in replacement, perhaps that’s a change that can be made at some point.

A more serious issue is GitHub’s approach of (not) trying to consolidate math and Markdown syntax. Something is working now, but knowing how hard it is to write a parser I’m pessimistic about how quickly bugs can be fixed and features added. The fact that math support is only on the top level of the document speaks for itself.

For these reasons, I would still recommend xhub for math on GitHub. Because of its choice of syntax, it doesn’t have any of GitHub-math’s problems. Cauchy’s theorem is rendered like